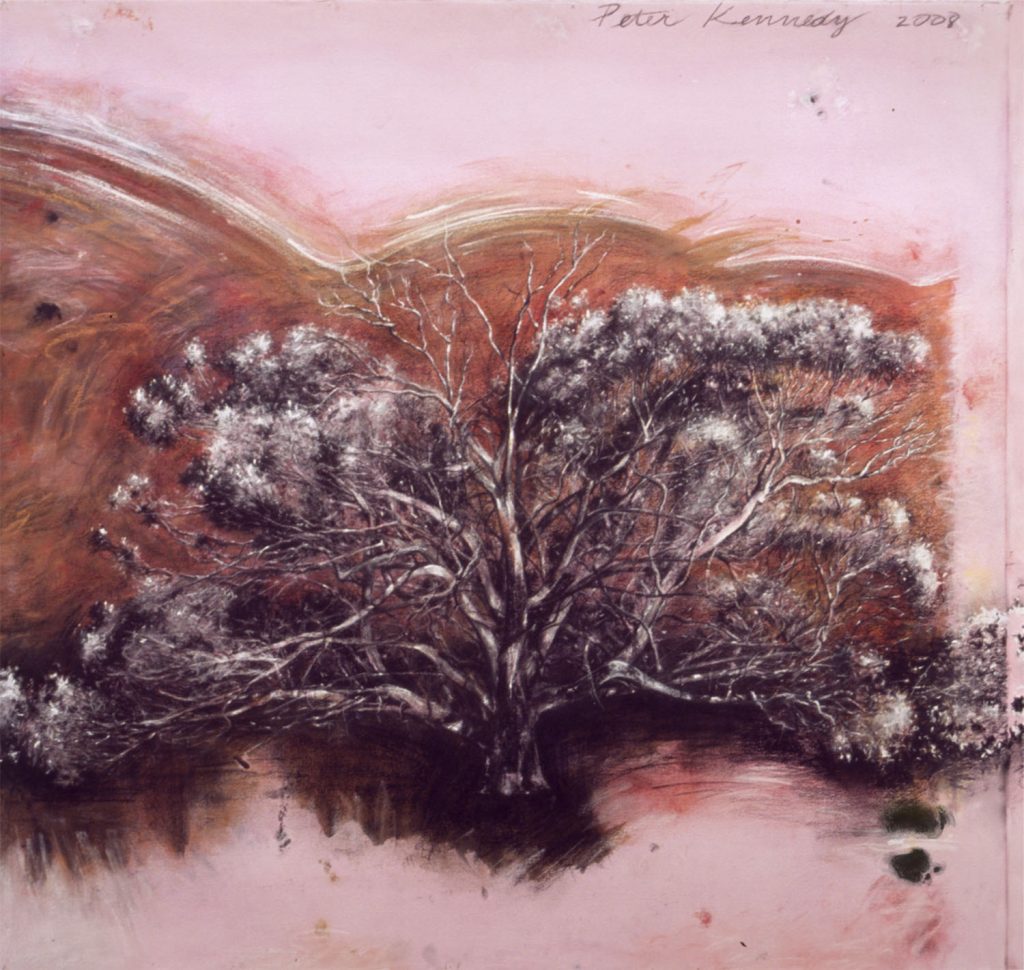 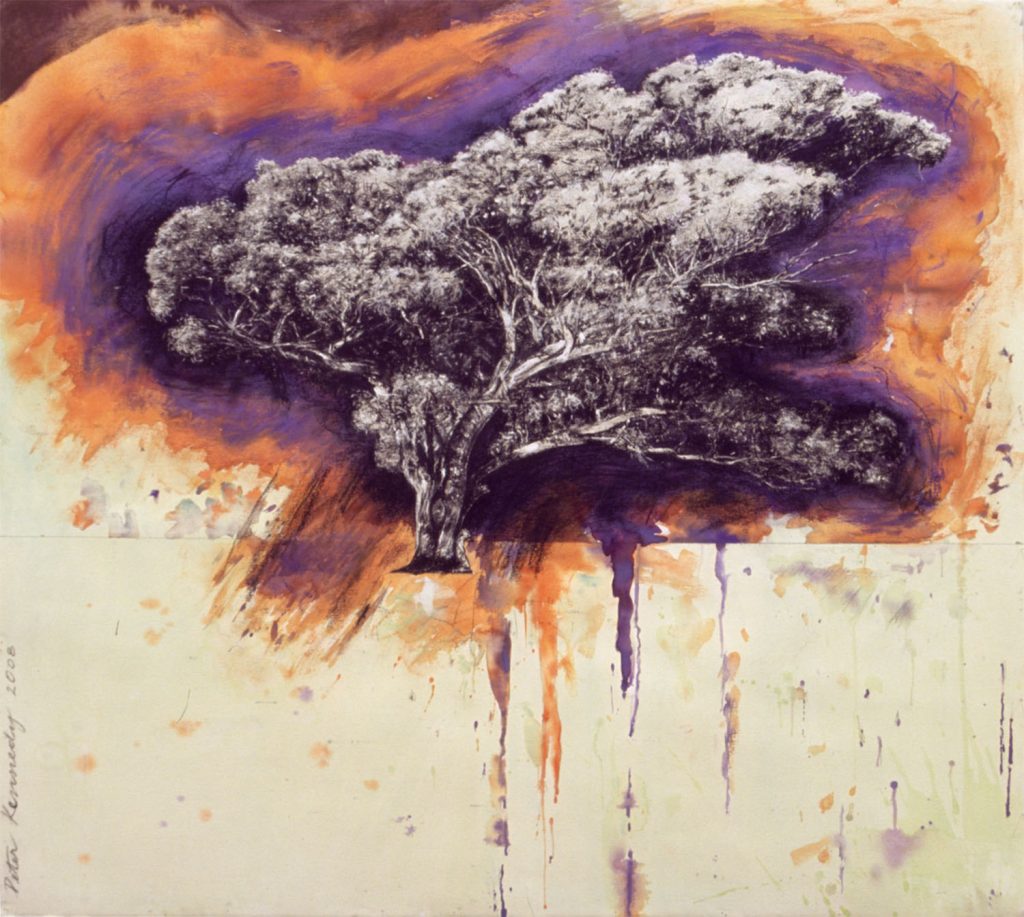 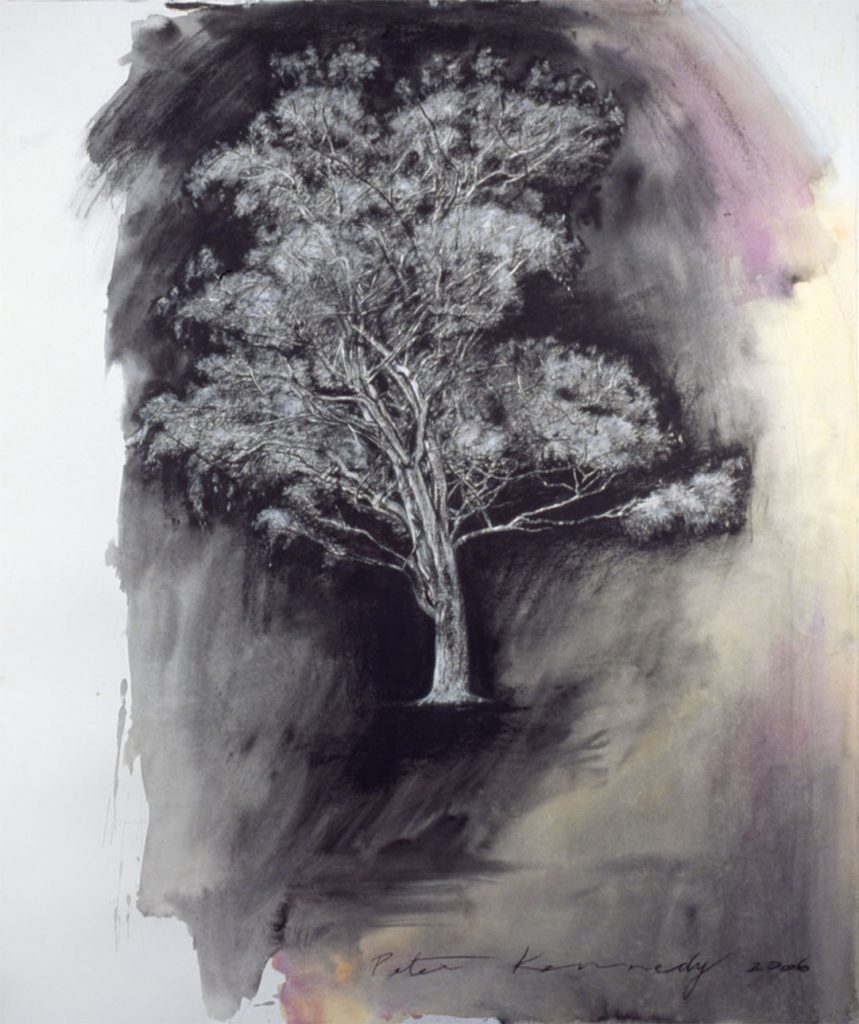 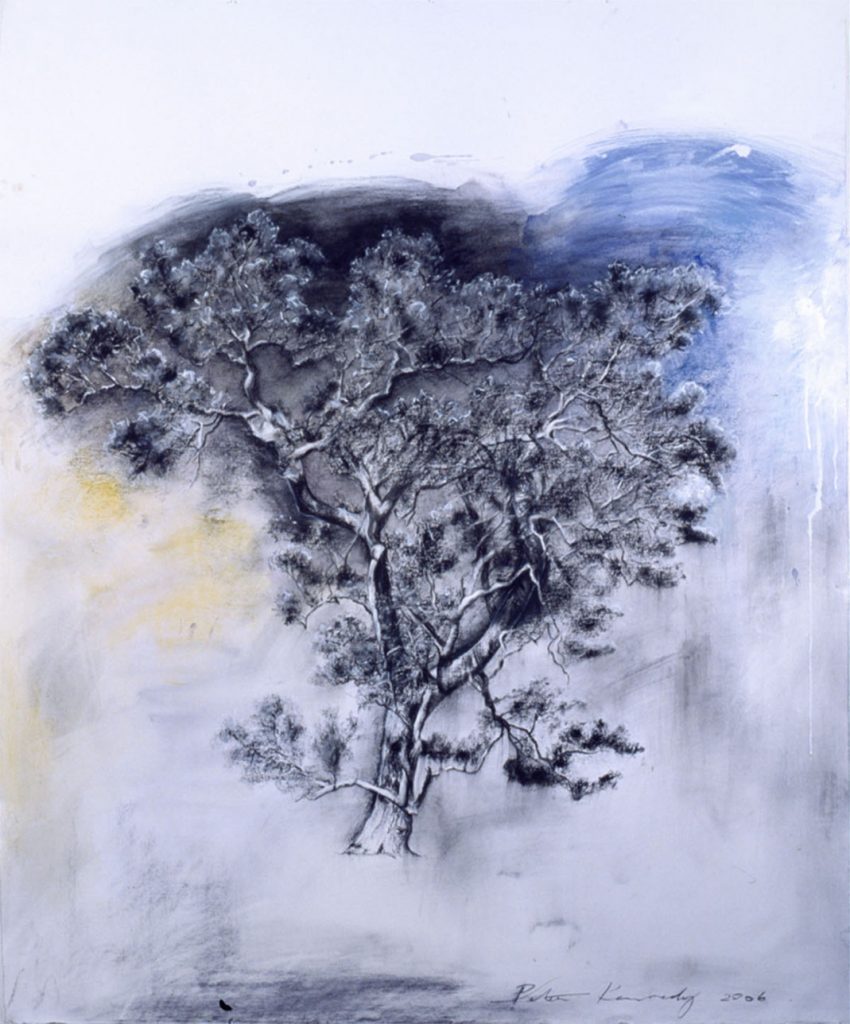 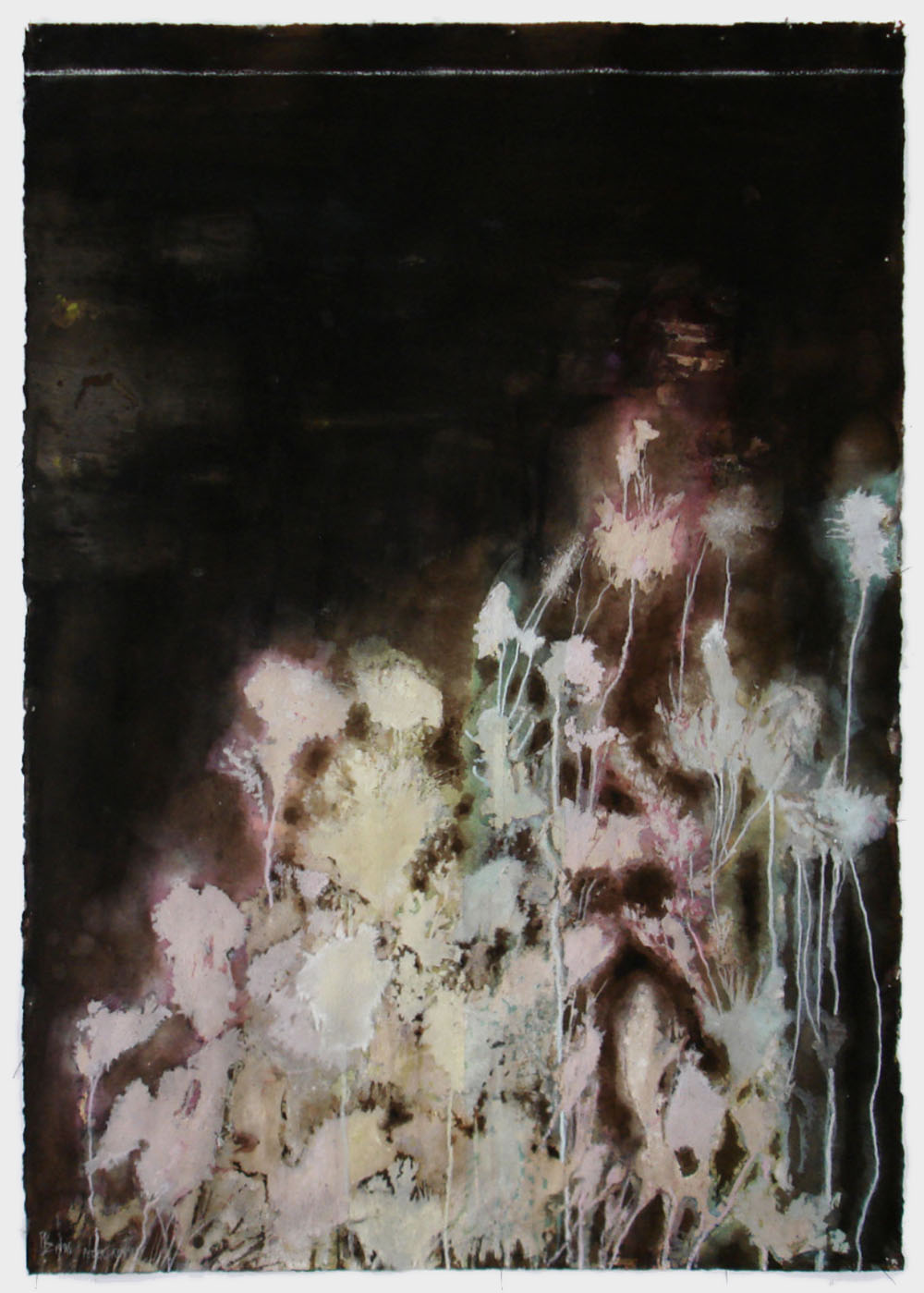 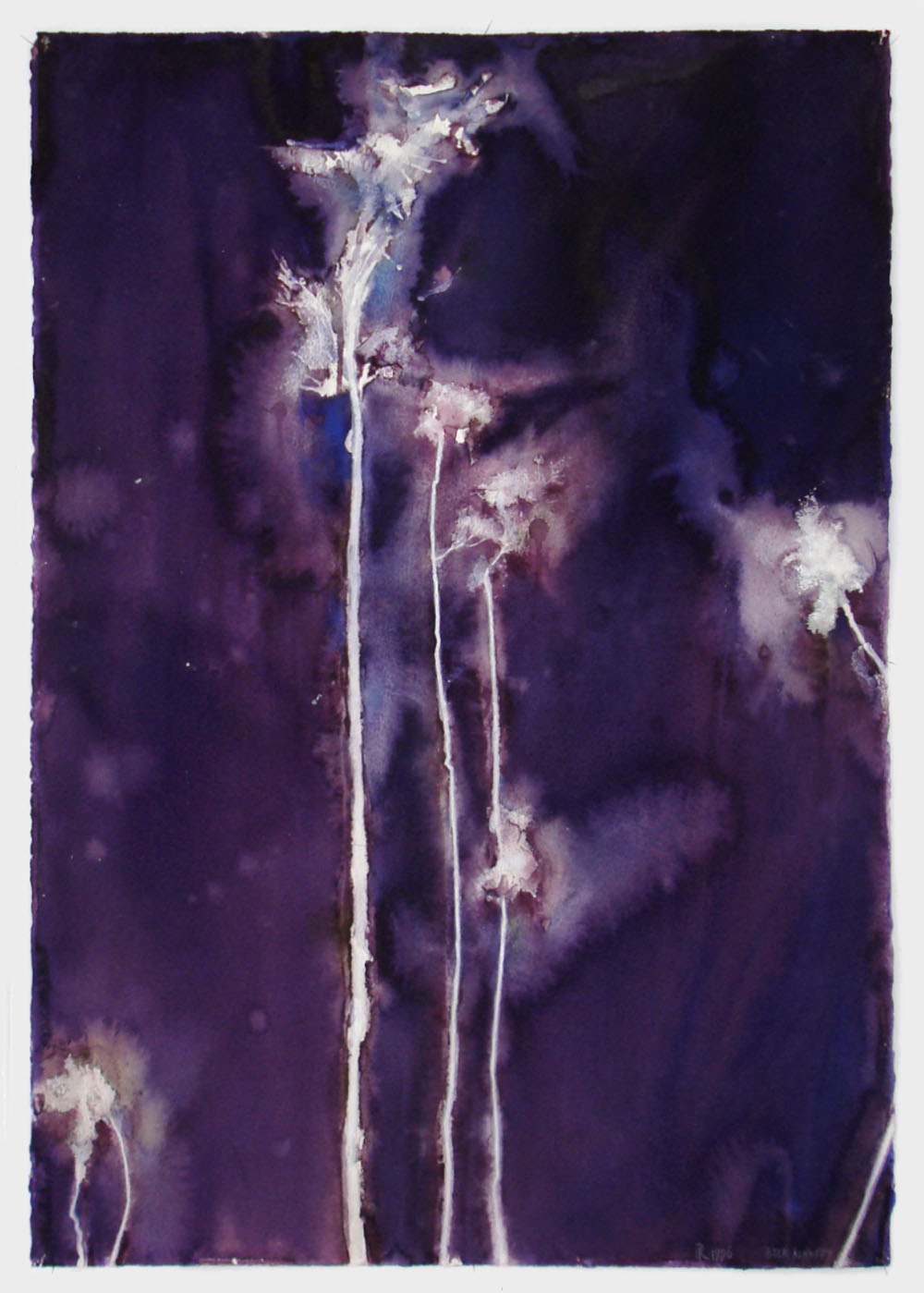 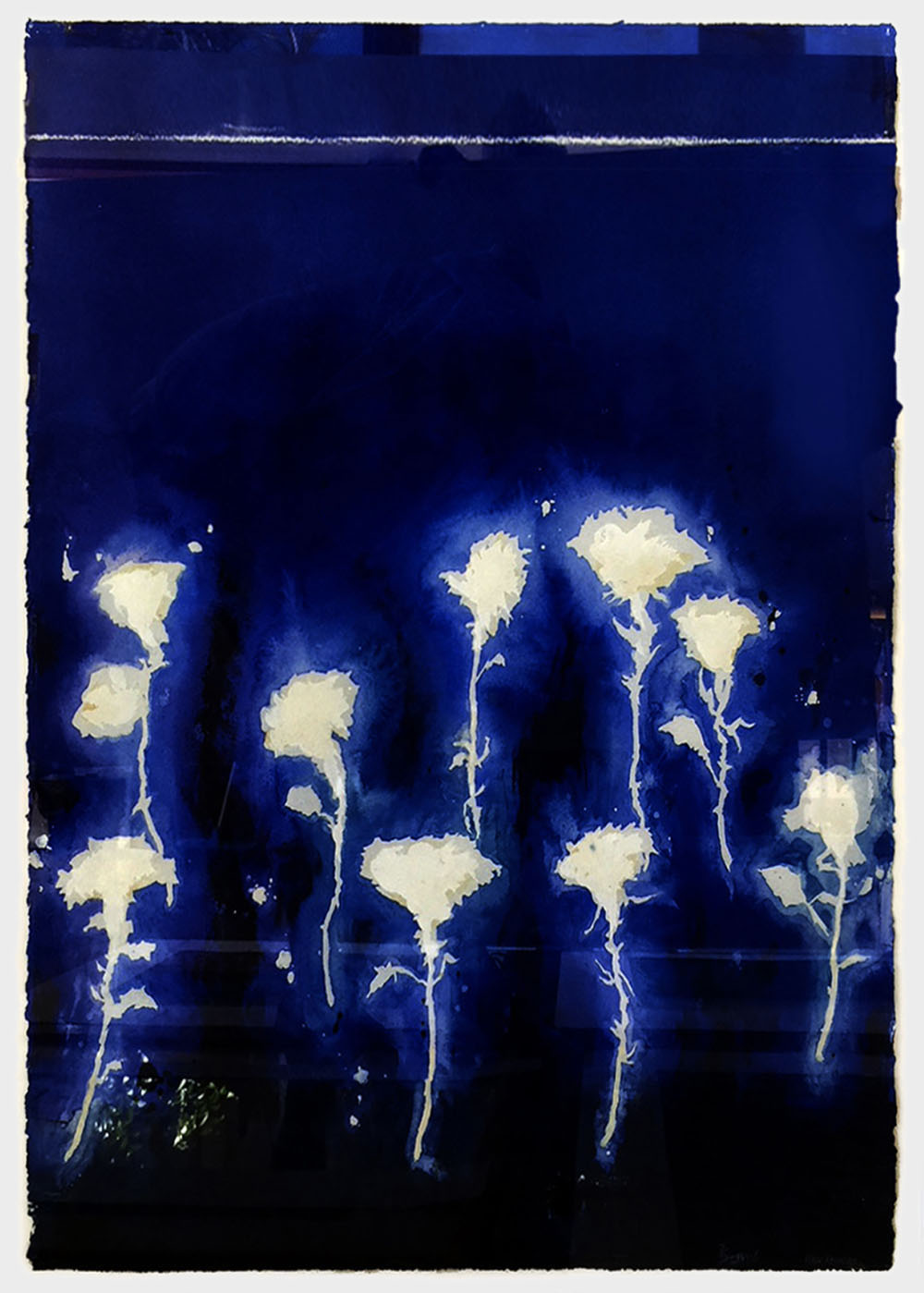 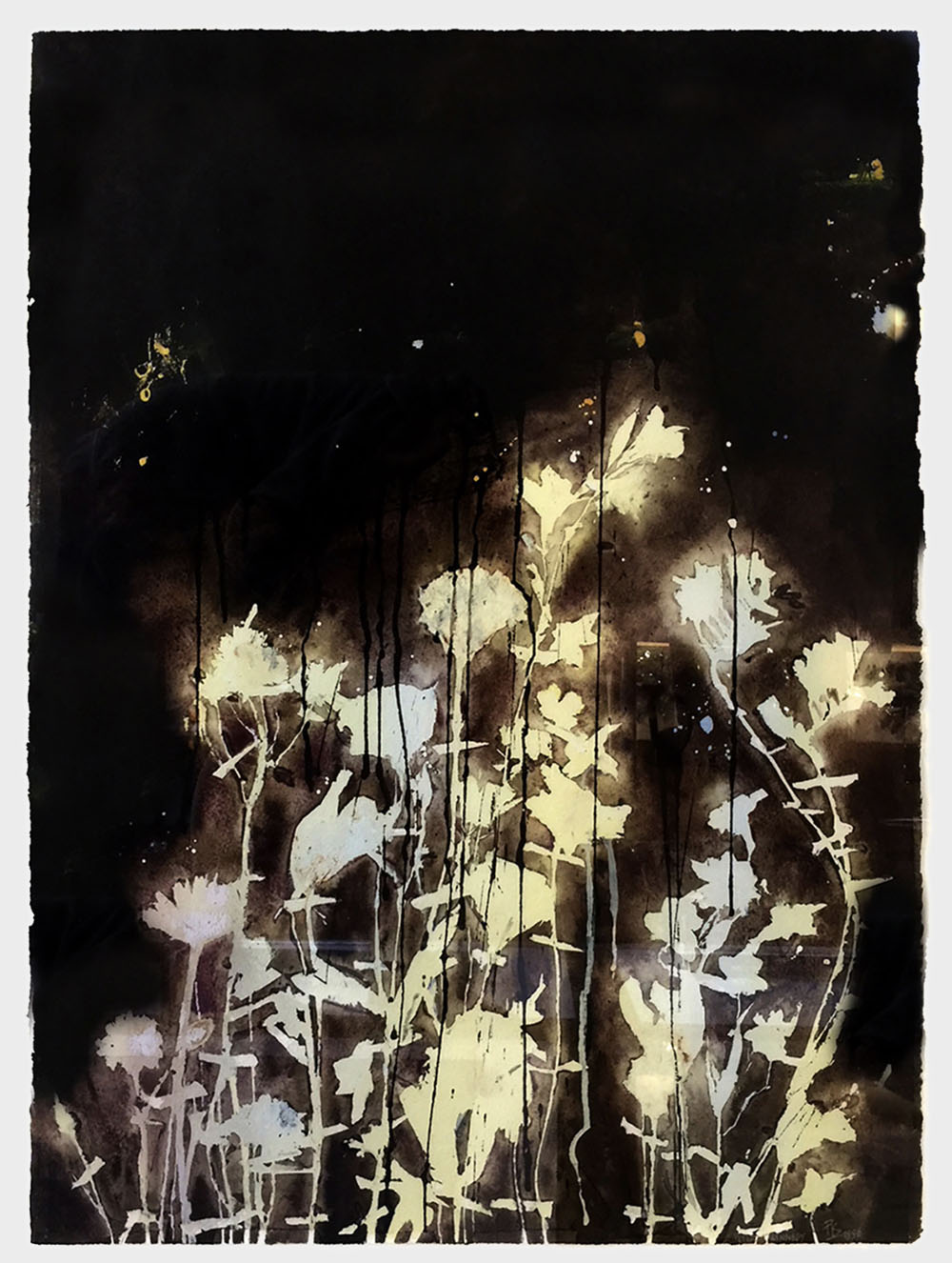 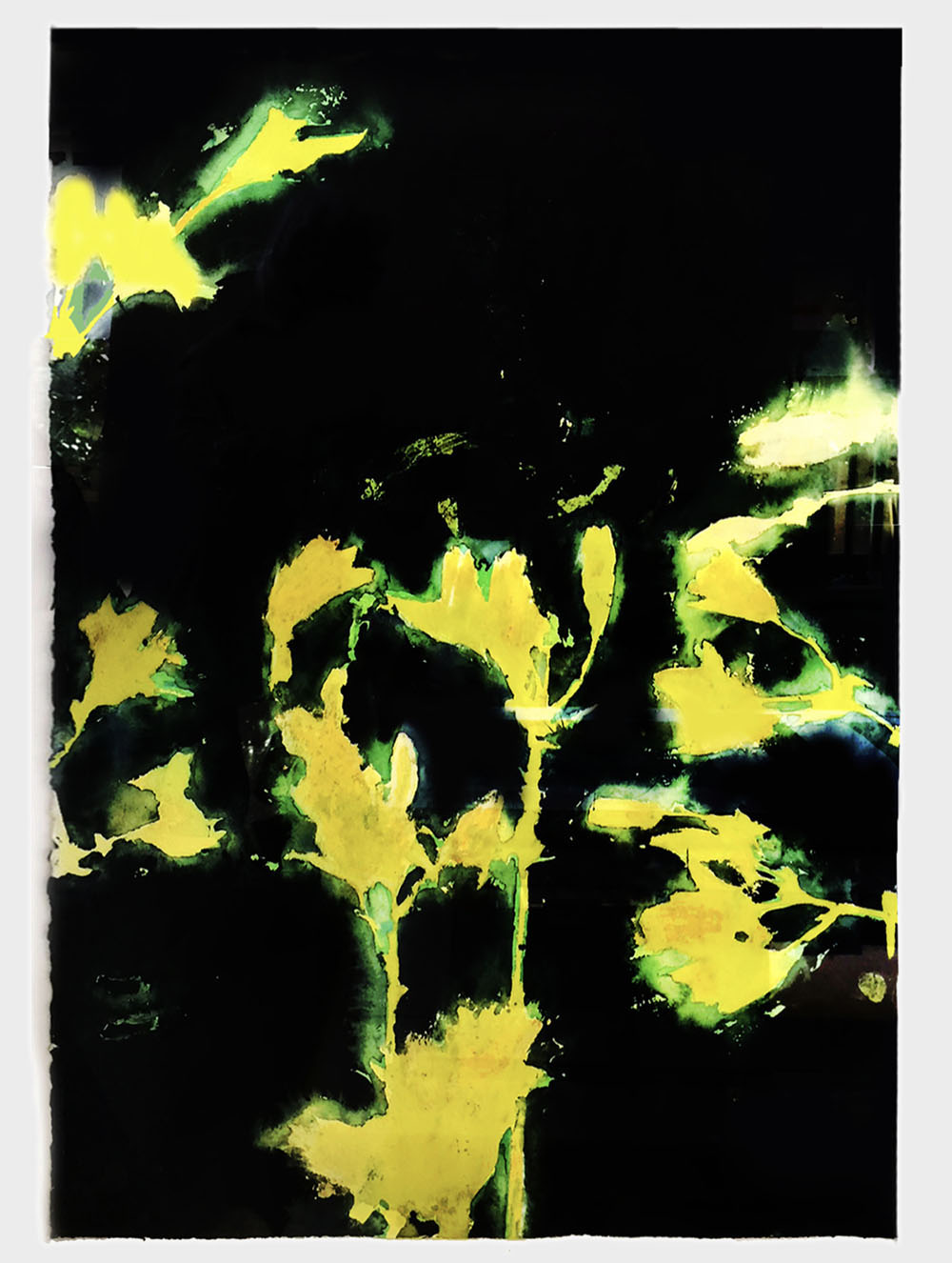 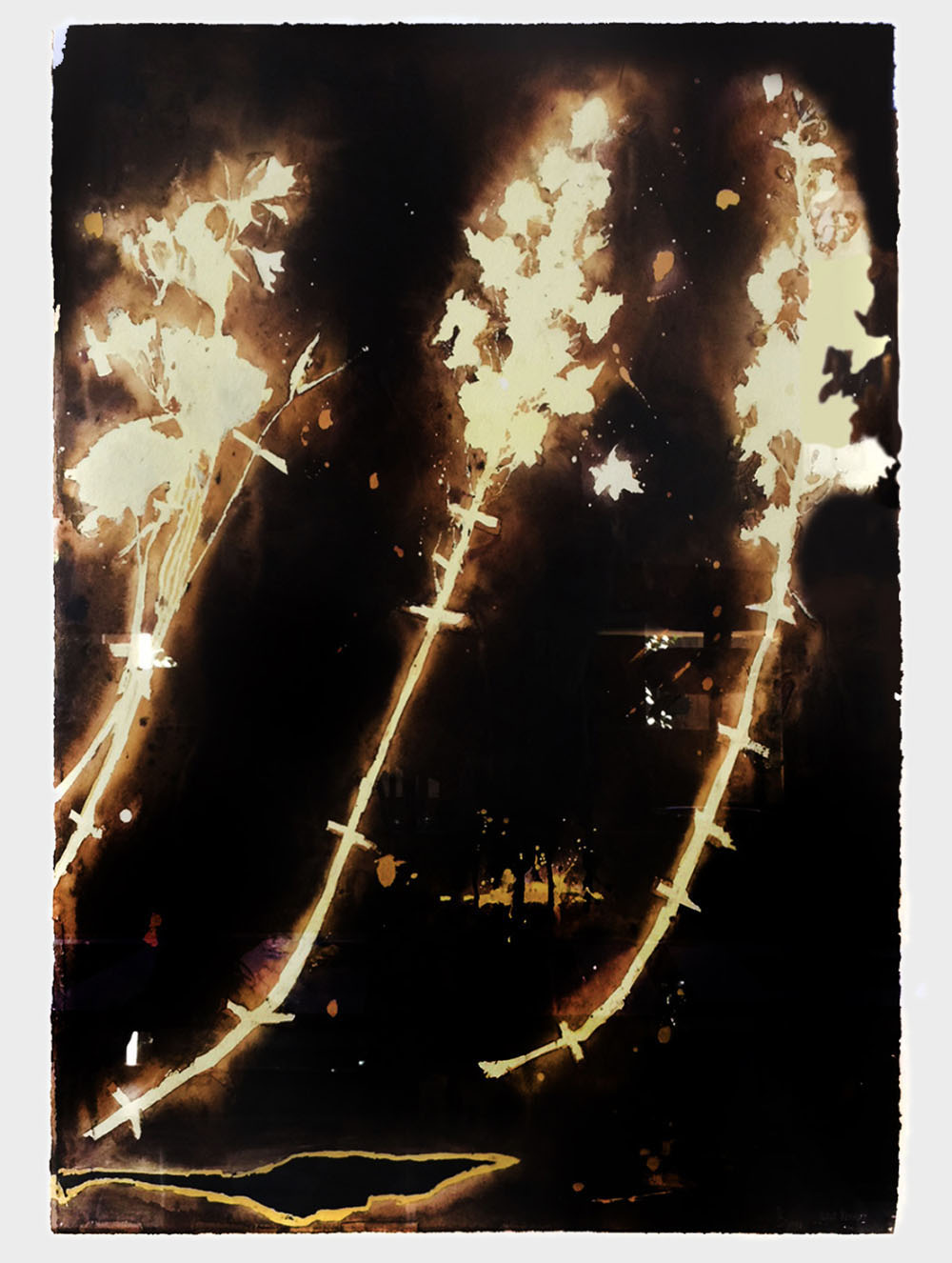 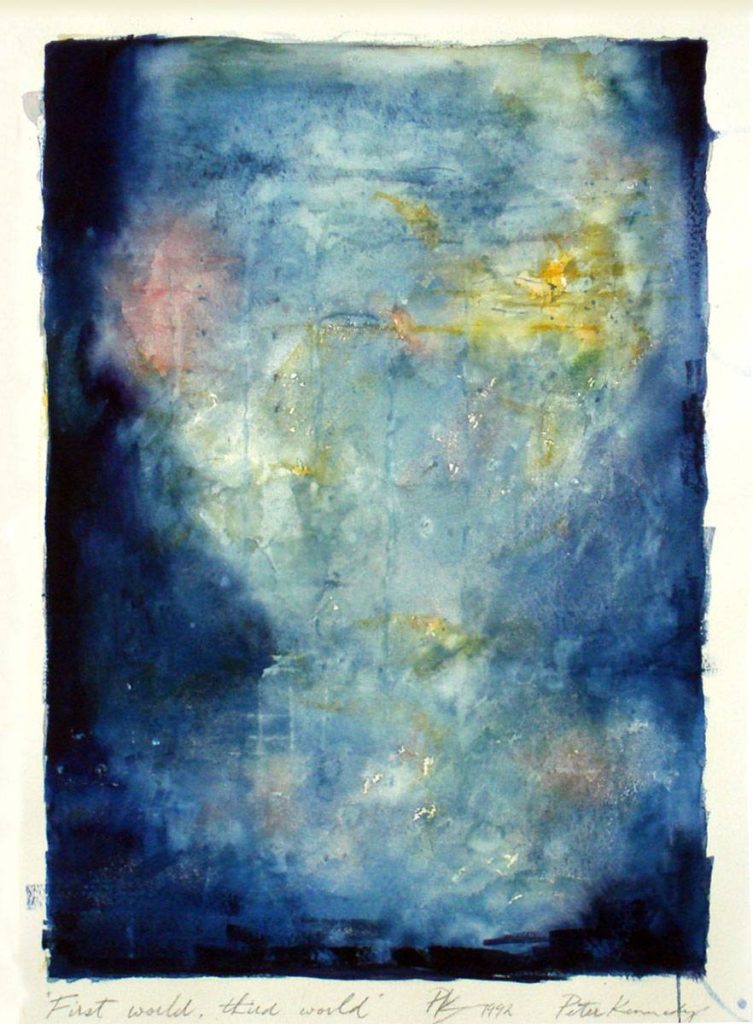 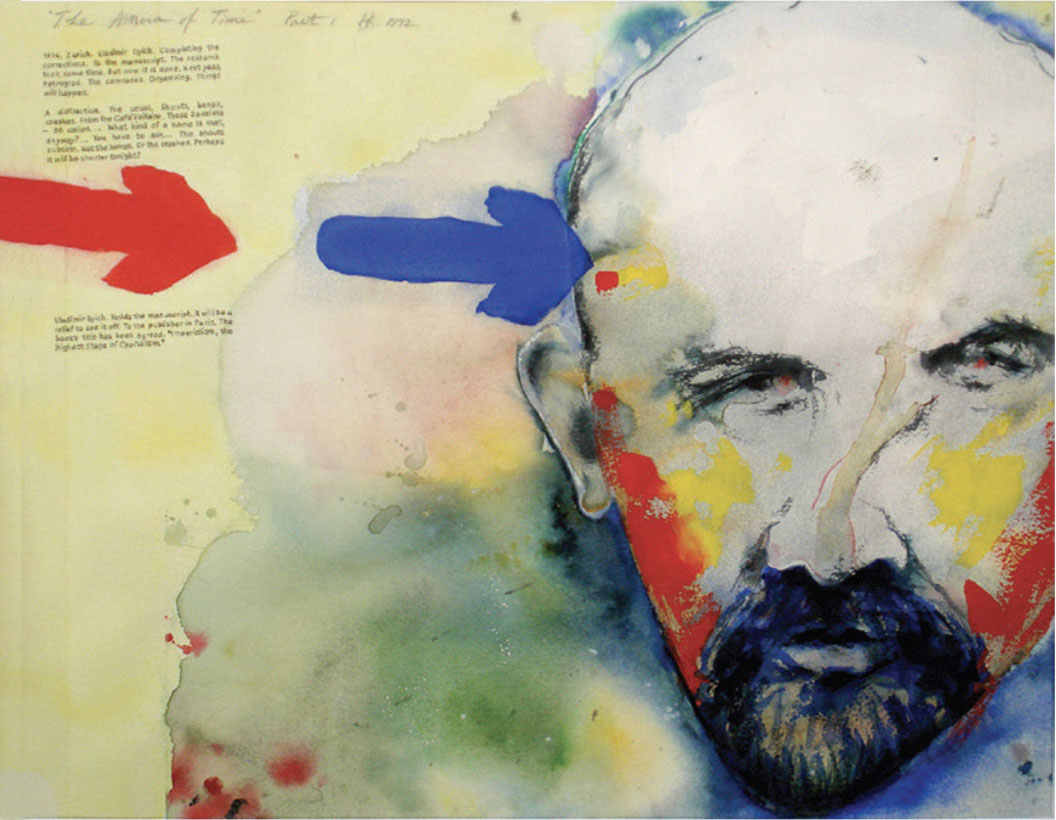 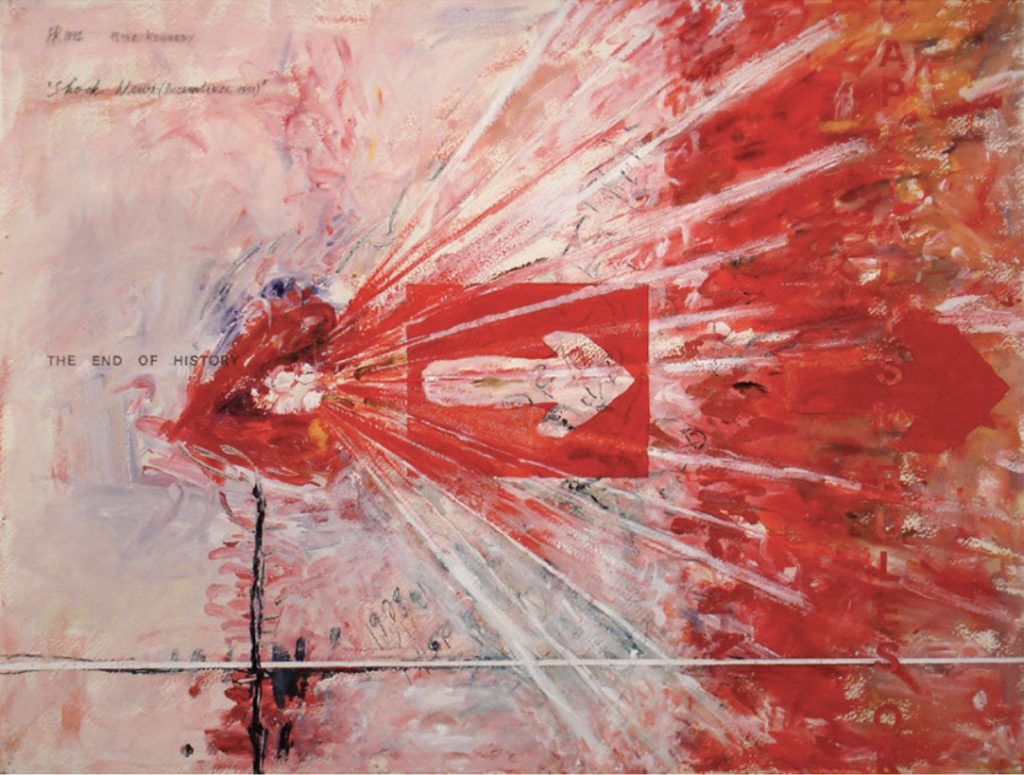 The Arrow of Time – Triptych   1992    Private collection
Note: The texts in Parts 1 & 2 are reproduced below. A background to the work is also provided.

1916, Zurich. Vladimir Ilyich. Completing the corrections. To the manuscript. The research took some time. But now it is done. Next year, Petrograd. The comrades. Organising. Things will happen.

A distraction. The usual. Shouts, bangs, crashes. From the Café Voltaire. Those Dadaists – so called. … What kind of a name is that, anyway?… You have to ask… The shouts subside. Not the bangs. Or the crashes. Perhaps it will be shorter tonight?

Vladimir Ilyich. Holds the manuscript. It will be a relief to see it off. To the publisher in Paris. The book’s title has been agreed: “Imperialism, the Highest Stage of Capitalism.”

1991, Moscow, December 25. Vladimir Ilyich is turning over. It’s been sixty-seven years. And now he’s moving. In the blackness. In the silence. Of his mausoleum. And. In the many graves beyond there is the same movement. Some who are turning Vladimir Ilyich knew at the time.

This work is about time and history. It is about the transit of ideas and the fate that becomes them. It is a lament for the failed hopes and dreams of a revolutionary generation who had hoped to change the world – but didn’t.

The time is Christmas day 1991. And the Soviet Union collapses – signalling the end of the Cold War. This work was my immediate response to that event – an event to which I felt a strong connection. Since the year of my birth (1945) the confrontation between capitalism and socialism, and with it the threat of nuclear annihilation, had been an ominous reality.

A junior partner with the US in Cold War conflicts, Australia fought alongside the US in Korea and Vietnam. The reality of this relationship during the Cold War – the tension implicit in it – meant that Australia could not be neutral in the event of a nuclear war. (It is an alliance with a long history. Australia assumes that the US will protect Australia should that be required. It is an assumption that has never been tested. Australia, in return, has always been a willing partner in US foreign military interventions).

The events of both Christmas day 1991 and earlier, the collapse of the Berlin wall in 1989, signalled to many in the West, the triumph of capitalism and ideological supremacy. With socialism swept aside, the brake on capitalism’s assault on human and natural resources would expand and continue uncontested in the name of a free market and economic growth.

An earlier example of my use of words in an artwork, the intention is to tell a story, to extend the visual experience and expand ways of “seeing”. At the time the work was an experiment. It now stands as a precursor to subsequent work where words and sentences are visually integrated.

Parts 1 & 2 has Lenin as its central character.

The story begins in 1916. Lenin is in exile in Zurich. He dreams of changing the world and works to that end. The Dadaists are also in Zurich, in  the  same  street  as  Lenin,  meeting,  and

performing at the Café Voltaire. They too dream; they dream of changing the world of art through art as avant-garde action. At this moment the arrow of time passes across art and politics. The respective histories gain momentum, become dynamic, driven by ideas.

In 1917 Lenin returns to Russia to lead the revolution.

Christmas day, 1991: Lenin, learning that socialism has succumbed to capitalism’s transformative force, turns in his Moscow tomb. His revolutionary comrades turn too, in their lost and scattered graves. The mass turning is audible. A dirge. A character in its own right, the arrow of time, sensitive to change and its destabilising effect, proceeds erratically.

This panel refers to Francis Fukuyama’s interpretation of these events as “the end of history”. I interpret this as meaning the end of ideology- an idea suited to Capitalism’s interests.

Also here, is an ironic use of contemporary street argot- “CAPITALISM RULES, OK” – an allusion to post-Cold War triumphalism in the West – a sentiment deeply felt and promoted by the US.

Once again the arrow’s course is straight… for the time being.

This is one of many works on the same subject. Some of these works are quite small and others are on a large scale. Most have not been exhibited. Those that have include Chorus: from the Breath of Wings, a major exhibition at Heide Museum of Modern Art, 1993. (See Installation / Sound / Performance section of this website, and for the drawings… ‘And And And’, ‘Anthemic Map’, ‘All that is Solid’, 1992, refer to Works on Paper section) 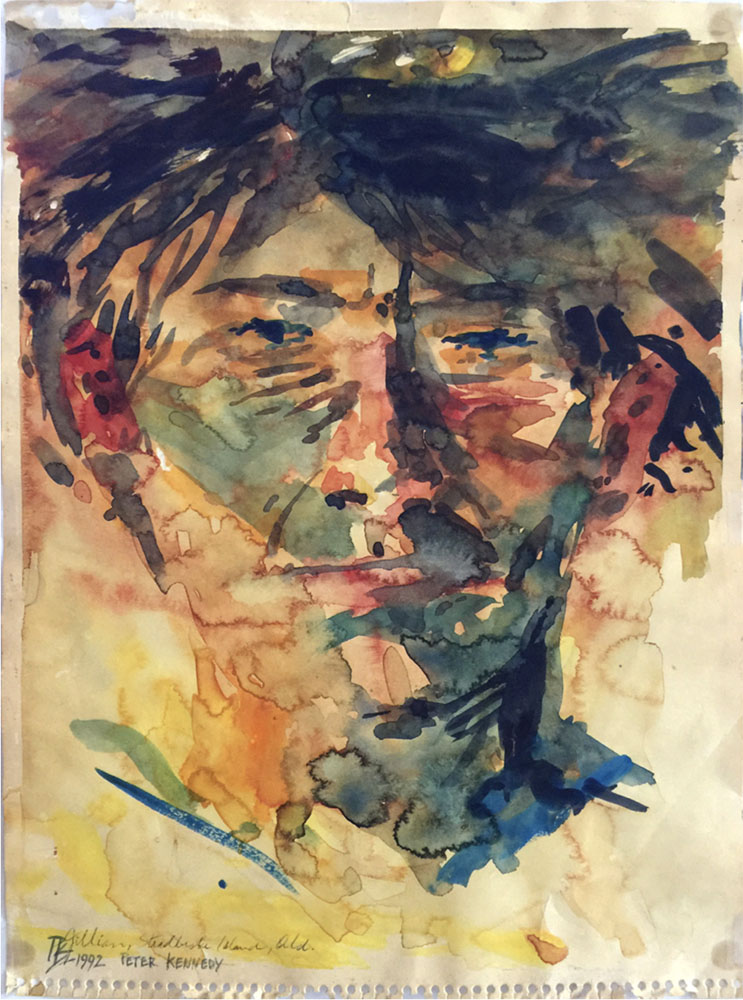 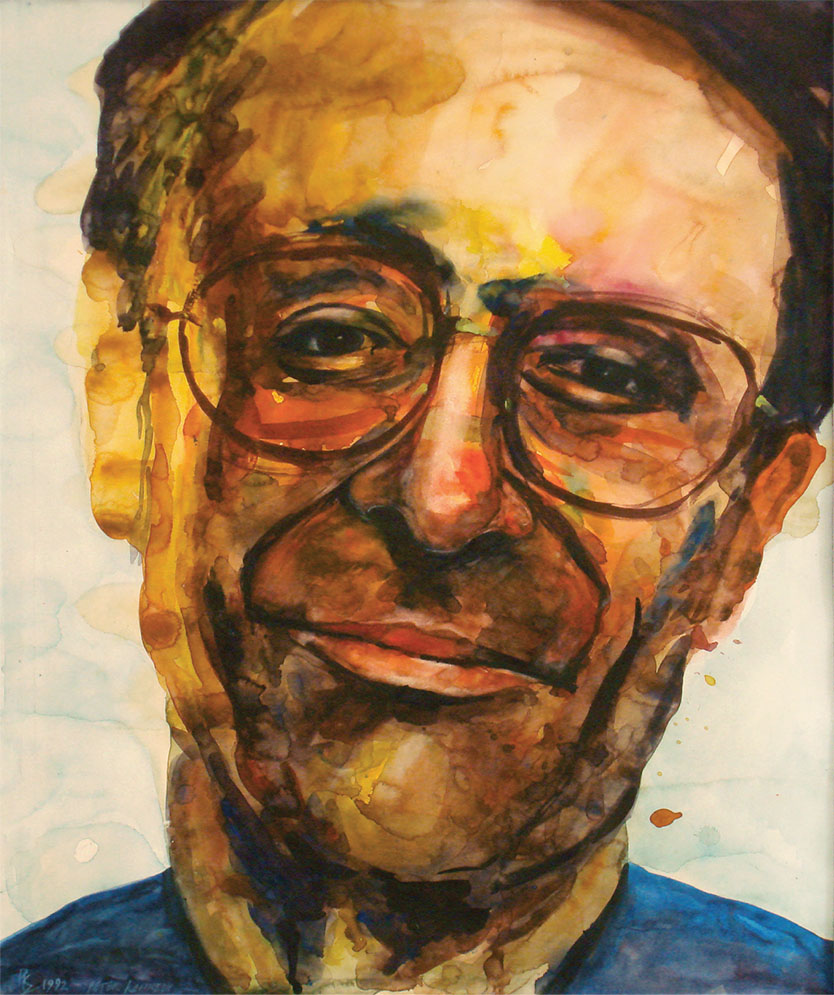 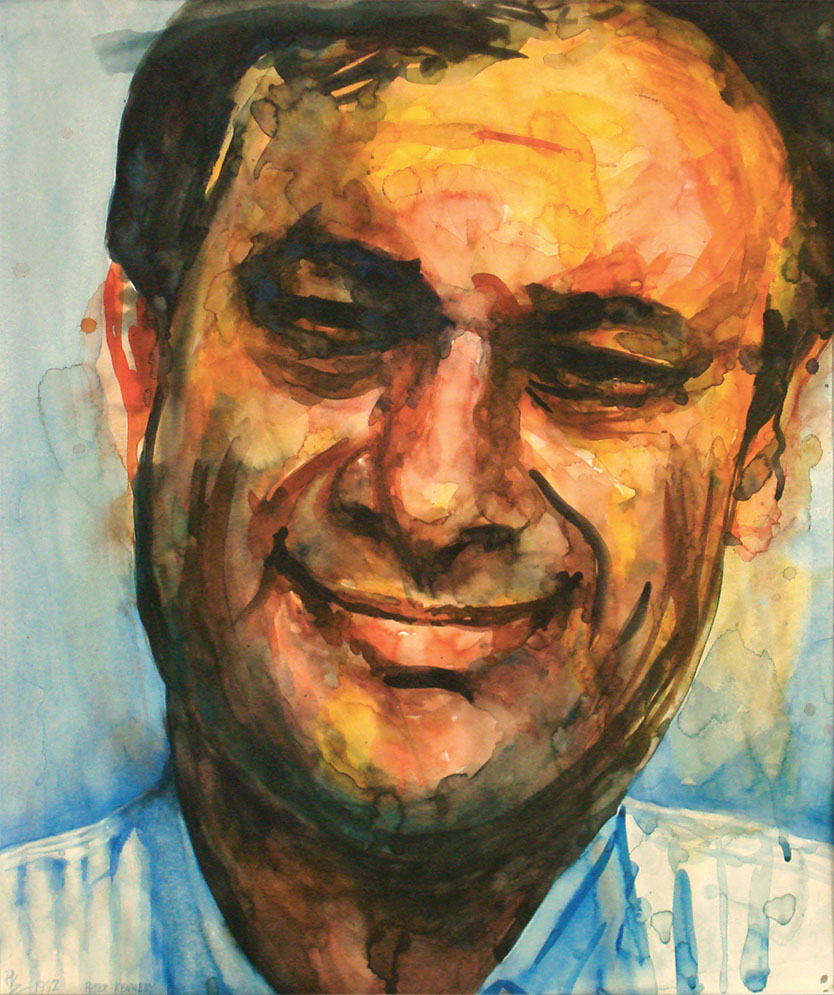 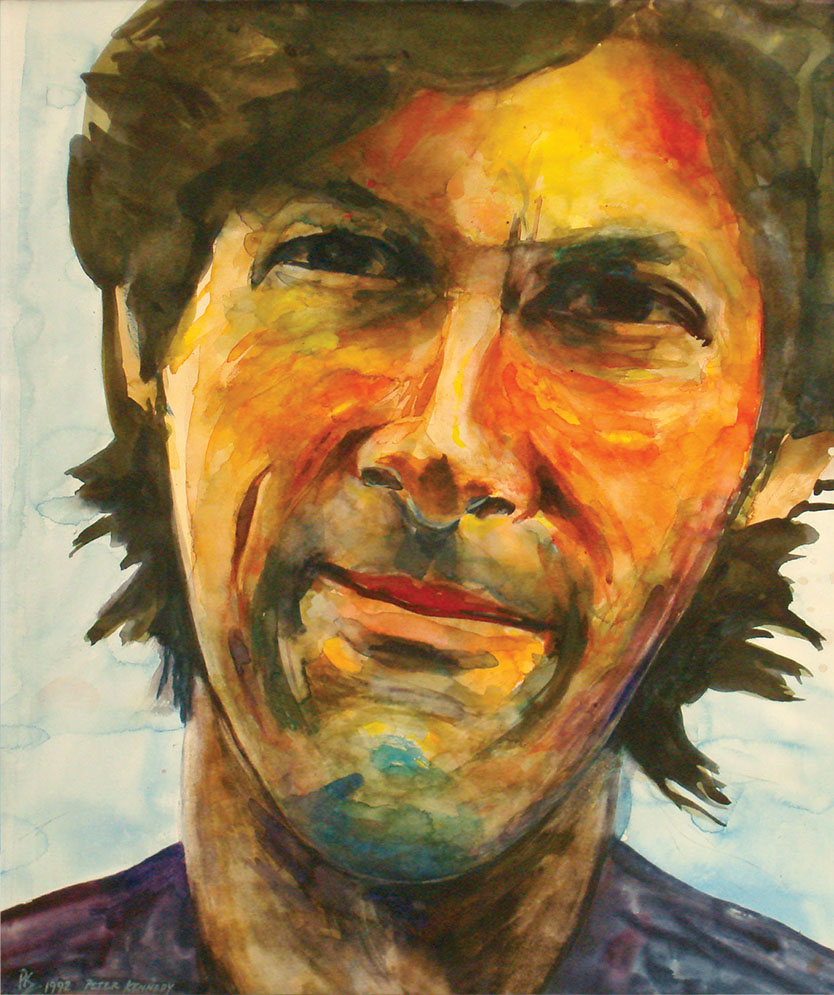 Three watercolour portraits of friends painted from snapshots taken in 1992 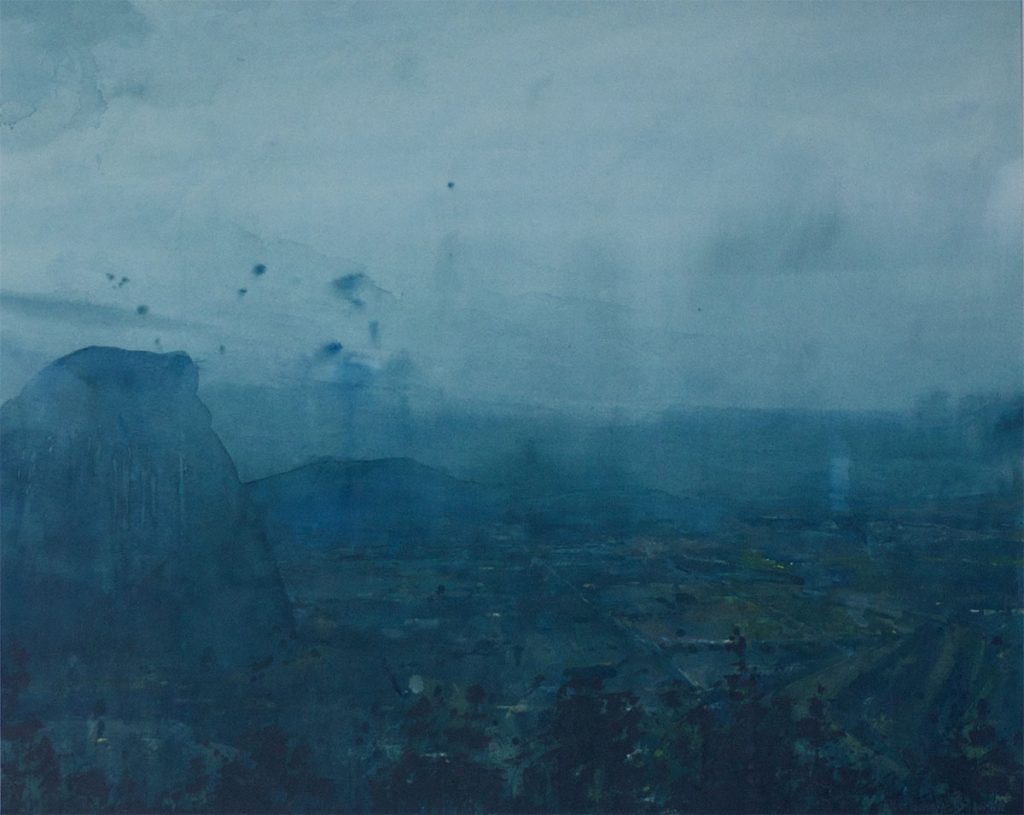 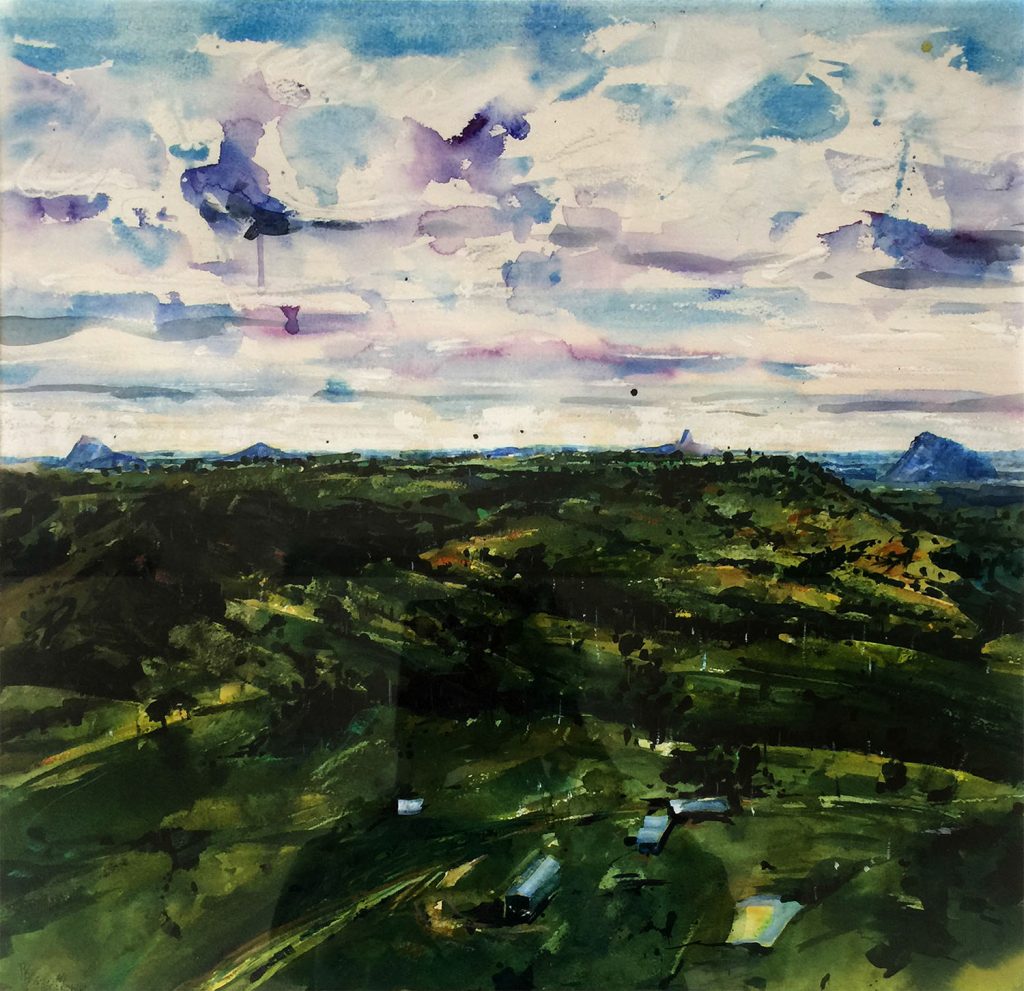 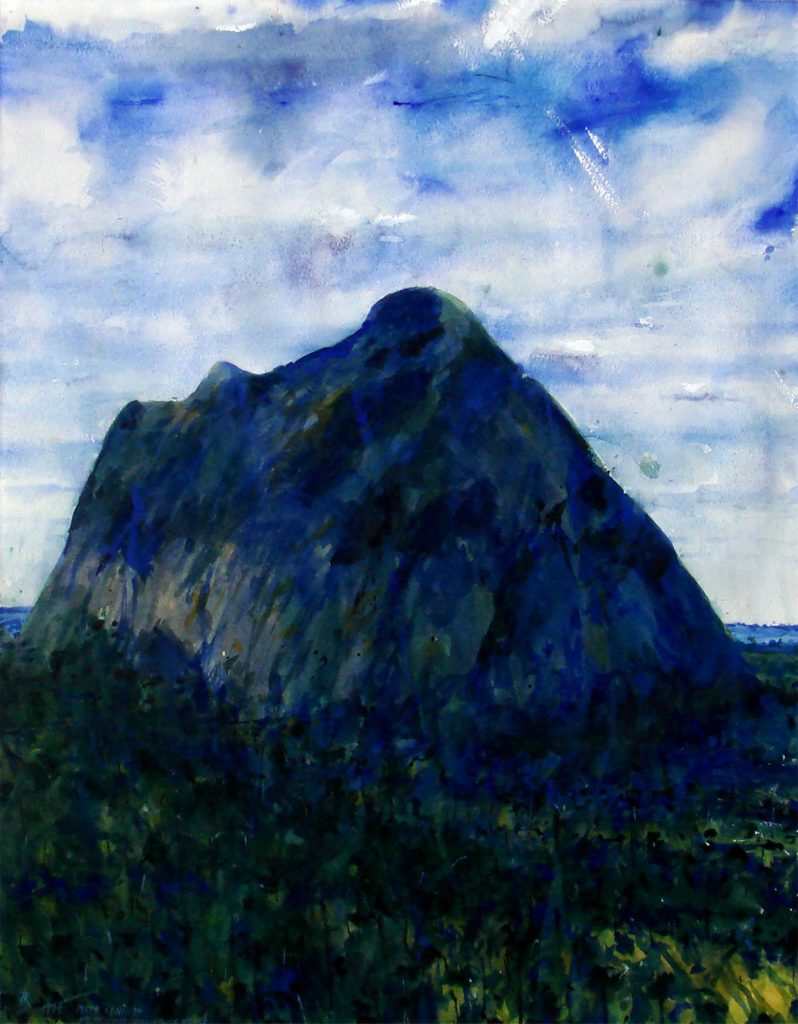 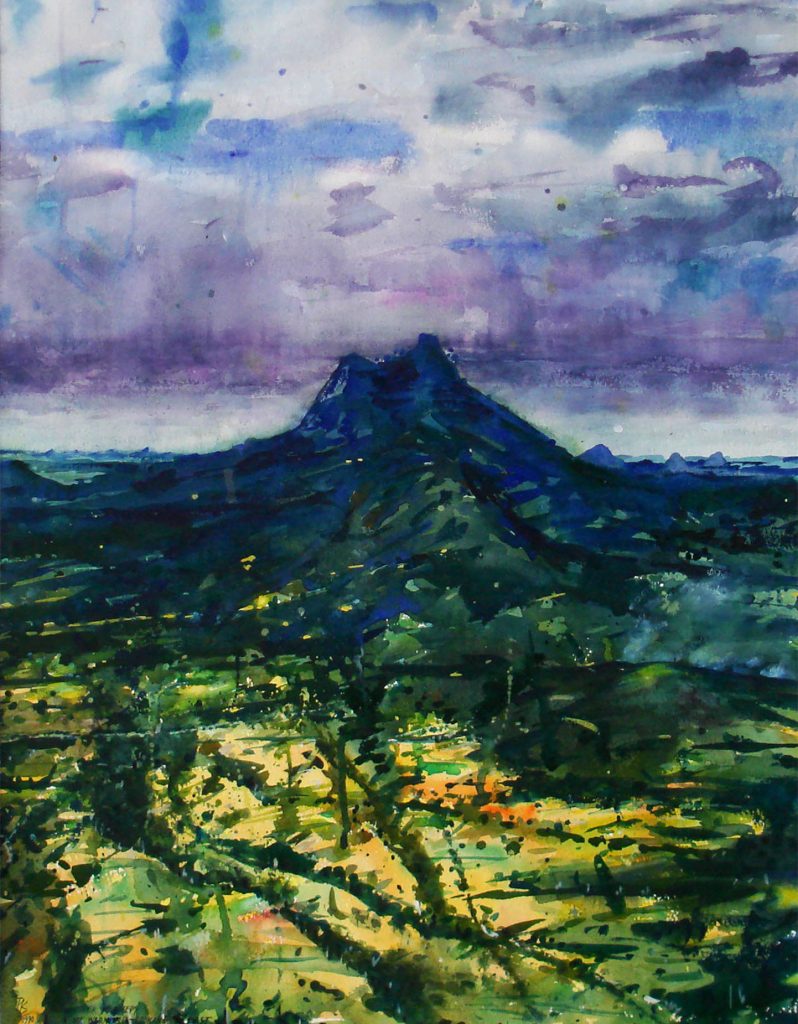 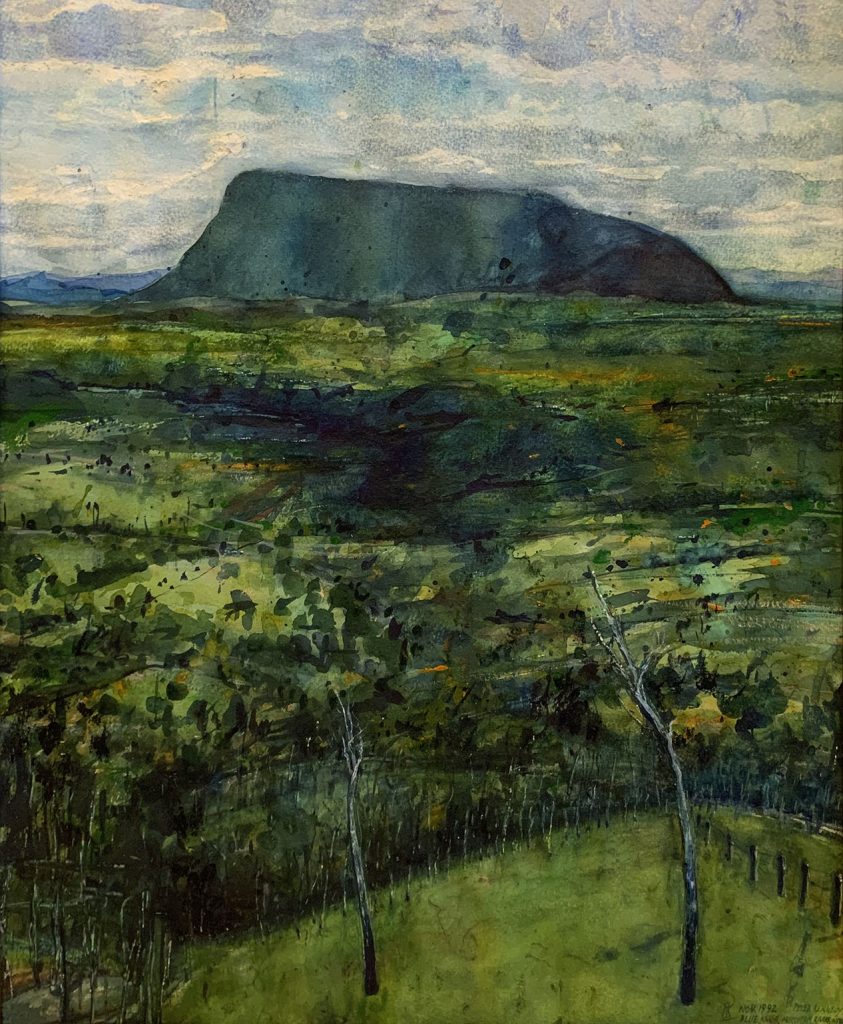 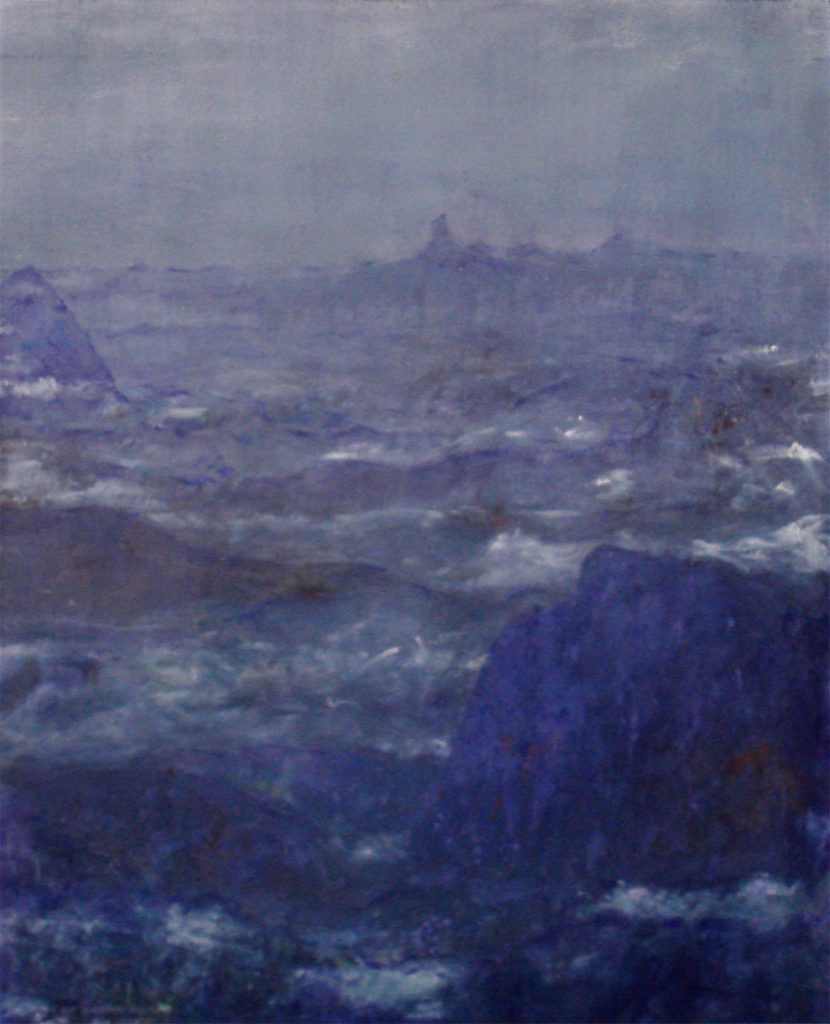 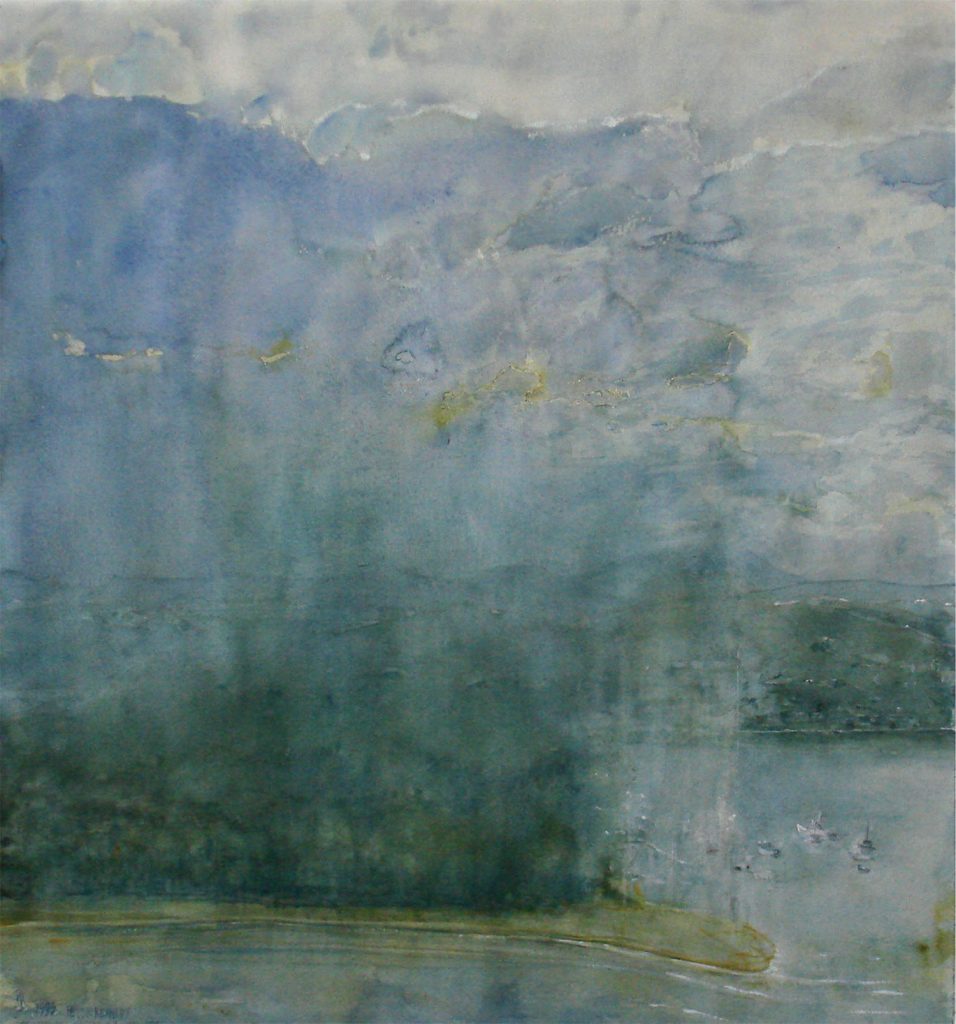 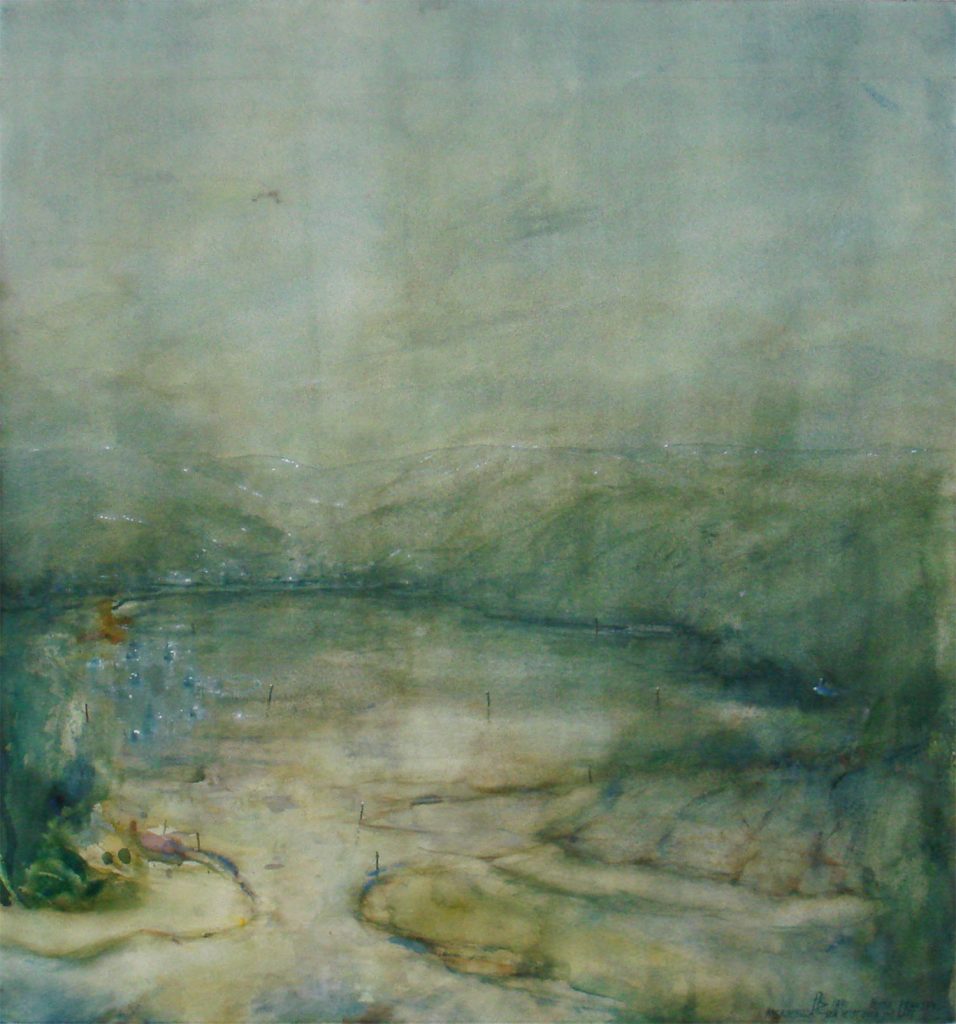 Mist that rolled in from the sea and settled over the lake, Merimbula     1991
Watercolour on paper     56 x 53 cm
Private collection